Last Friday, during halftime of the Woodside v Sequoia boys basketball game, the unified basketball game was played between Sequoia and Woodside. The Unified Basketball game was a game played where special olympics athletes and general education athletes come together on one team to compete. There were great performances by everyone that played, with a multitude of support from the crowd. This was the first of many Unified games and we encourage everyone to come out to support the team. 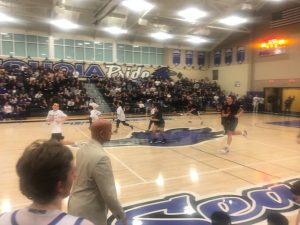