Seq tied the Burlingame Panthers 0-0 on Tuesday, 1/14. With a strong defense and goalkeeper, Sequoia kept the game level until the end. 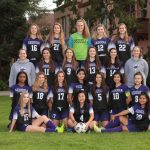 The girls varsity Soccer team has continued their successful season with a 1-0 victory of Sacred Heart Prep.  Their lone goal coming from Mackenzie Caswell. The Ravens have continued their great defensive season with this being their 5th game limiting the team to no goals, and look to continue it against Burlingame High School on

Sequoia Girls Varsity Soccer has came out on top once again. They continue their great season with a victory over last years reining league champs Menlo Atherton.  They won the game by a score of 2 goals to 1. They goals were scored by Kira Spottiswood and Heather Benway. Sequoia hopes to continue their great

On Tuesday, January 7th, during a fierce fought battle between Seq and Woodside, Junior Mia Ricard scored first to put Sequoia in the lead. Sequoia’s defence kept the ball from reaching goalkeeper Lita Billman until the second half when Woodside scored. With a final score of 1-1, Seq Girls Varsity remains undefeated.

On Tuesday 12/9, girls varsity soccer team finished with a final score of 0-0 vs. Cappuccino. Goalkeeper Lita Billman kept the score level with saves in the first and second half.

After winning the PAL Ocean division the previous year, the Sequoia Girls Soccer team is looking forward to having another good year. For the first time in 5 years, the Sequoia Girls team will be competing in the PAL Bay division, the most prestigious division in the PAL. When asking Coach Melissa Schmidt about the

On Dec. 3, Girls soccer traveled all the way to San Benito. With a final score of 3-2, Girls Varsity came out on top. The opening goal came from sophomore Kelly Felix Pereda. Goalkeeper Lita Billman kept the Seq girls in the lead until the final whistle.