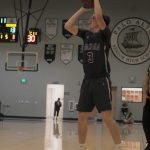 On this past Saturday, Sequoia played at Palo Alto High School in the CCS Division 1 Boys Basketball Finals. In a thrilling back and forth game, Sequoia eventually lost the game 47-36. Sequoia, held an 18-9 lead early in the second quarter due to the scoring outburst by Kiahn Nice-Whiteside. However, after Paly switched their

On Tuesday February 25th, the Varsity basketball team travels to Evergreen High School in San Jose to play their second CCS game of the season. Last Friday the Ravens beat Milpitas by a score of 54-41.

This Friday, February 14th, the Ravens play the Scotts at Carlmont. This is the final quad game for the Ravens this season. Boys Varsity starts at 7:45 PM.

Last Friday, during halftime of the Woodside v Sequoia boys basketball game, the unified basketball game was played between Sequoia and Woodside. The Unified Basketball game was a game played where special olympics athletes and general education athletes come together on one team to compete. There were great performances by everyone that played, with a multitude of support

The Ravens defeated Aragon 66-43 tonight. The Ravens are looking forward to playing the Wildcats at home this Friday, January 31st.

This Friday, January 31st, the Wildcats come to Sequoia to play the Ravens for the second time. The Ravens won the first game and determined to win this one as well. Varsity boys starts at 7:45 in Gym 1.

The boys travel to Palo Alto for a non-league game against the reigning Division I CCS champs. The game is on Thursday, December 19 and varsity tip off is at 7:00pm. After losing to Palo Alto the previous year the boys are looking for redemption.